I have been hearing a lot about Facebook these days. It has become really popular amongst the developer community after Facebook launched its API for public use. I was interested to explore FB after Ram @ Photon worked on  a Facebook App project.

I have still not got hands dirty on the Facebook API. Don’t find the time so far. But I managed to browse the site.

The nice shades of blue mixed with other colors make it really pleasing for the user.

Facebook comes with an User Verification feature which lets you verify yourself by supplying your phone no. Orkut is full of spammers and idiots these days.

Since Facebook is was initially targeted at the Student and Professional Community its comes with a lot of features. Groups, Events, Photos , Notes

Really admire this guy for making a site real big in no time. FB was founded in just Aug 2005.Started the site while still in college ( Some what similar to my story. Actually I started mine in March and still trying to figure out what I want to do with the website).
This guy has redefined the meaning of Social Networking at least in the Business Context.

In August 2006, It was the first major social network to give access to its API. Its limited to 100,000 requests per day though.

I am a PHP fan and Facebook is a brilliant example of what you can do with PHP and prove that its nothing inferior to ASP.Net (Orkut) 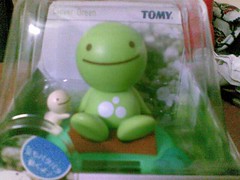 I got this cute doll as a gift from one of our clients. It feels so good when clients are this sweet, You feel you have to deliver and perform better than before.

Bheema – The Trisha – Vikram starrer is set to hit the screens for Diwali .

I was reading some news online at ibnlive.com and saw a flashy promo banner for the film.

Clicking on it took me to Buzz18.com the latest site under the Network 18 banner.

You can listen to the Audio tracks of the film on the same site.

Can we call this Desi Online Marketing ? This is the first time I am seeing a Tamil movie being marketed online.

check out this page on buzz18

http://dev.mysql.com/doc/refman/5.0/en/old-client.html has some thoughts on the same

I hardly find time to watch tv these days. I was watching Aek Chaabi Hai Pados Mein on Star which is a nice family entertainer. She plays the Female lead in the serial. I have seen her on so many other ads these days. But didn’t know her name. There’s not much I could find about this future Bollywood heroine I’ll try to post some more pictures of her soon.

I was searching for a book and landed on amazon.com.

I already have an account there. So I signed in and tried to order the book.

Looks like I will have to wait for the book to hit indian stores , may be I can get in in 2020.

McLaren have been excluded from the 2007 constructors’ championship and fined US$100 million following Thursday’s FIA World Motor Sport Council (WMSC) hearing in Paris. Drivers Fernando Alonso and Lewis Hamilton have not been penalized and are free to continue their fight for the drivers’ title.

More on this news here

This  means Ferrari are going to win this years Constructor’s title.

I almost forgot about F1 about Schumi retired.

This one is super

No McLaren representative will be allowed on the podium should a McLaren driver win any of the remaining races of the 2007 season.

rendering shockingly easy and “for worse” because its simplicity and ease-of-use come at the cost of efficiency and, ironically, bandwidth.

While UpdatePanel brings AJAX magic to ordinary Web pages, it doesn’t bring the efficiency we normally associate with AJAX. Did you know, for example, that when an UpdatePanel control performs an asynchronous AJAX callback to the server to update its content, the request contains everything a conventional ASP.NET postback contains, including view state? Most developers assume that AJAX eliminates view state. That’s not the case, though, with UpdatePanel’s brand of AJAX.

SEOMoz has come up with a sexy SEO quiz. The questions are kinda advanced and I fell for a couple of them.

Do take the quiz and post your scores here.

Are you an SEO Expert?