Mobile Blogging in India is an emerging topic for discussion in India.

Most bloggers would have heard about it . Its also called Moblogging
The number of mobile users in india is so huge. But the percentage of users dedicated

GPRS or internet connectivity is still small compared to the no of mobiles.

This can be attributed to the costs connected to this VAS (Value Added ) services.)

But as on date, service offerings from cellular operators are far more important factors than the cost.

The average guy having an internet enabled mobile phone might not hesitate to shell in a few bucks for net access. (atleast me :D)

The reliability of these VAS services is seriously not as good as the global counterparts.

The latency during the mobile browsing just suck big time, no matter u got gprs , egprs /edge.

So does all this sound great news if you want to use your mobile phone to blog ?

You must be thinking, I m crazy to title the post as Mobile BloggingÂ and then downplay it.
Blogging has become a big addiction among internet users in India. Mobile Blogging can become popular only if the state of the Mobile internet services improve.

Landed on this site today.

Gliffy Inc. is a next-generation rich internet application company based in San Francisco, CA, USA. Our mission is to provide platform independent internet applications with rich user interfaces for collaboration. Since May of 2005, Gliffy has funded development of our technology through bootstrapping and OpenLaszlo consulting services.

I have setup XAMPP at work. It comes with Apache 2, MySQL, phpMyAdmin and a whole bunch of stuff.

The Apache resides at

[code lang=”php”]Only one usage of each socket address
is normally petmitted. :make_sock could not bound to address:0.0.0.0:80
no listening sockets available , shutting down
Unable to open logs
[/code]It was because there was a conflict in the port 80.

Now i went to the website properties in IIS and changed the port no to 9090 from 80.

[code lang=”php”] Only one usage of each socket address
is normally petmitted. :make_sock could not bound to address:0.0.0.0:443
no listening sockets available , shutting down
Unable to open logs

[/code]Now i suspected the conflict was in the SSL port so tried digging through the XAMPP files.

Navigate to this line.

Now i can run IIS and Apache parallelly 😀

Do you know how these companies got their names… I bet you must have known most of them. Here is a revision for you.

Compaq
This name was formed by using COMp, for computer, and PAQ to denote a small integral object.

Mercedes
This was actually the Diamler/Benz’s French financier’s daughter’s name.

Adobe
This came from the name of the river Adobe Creek that ran behind the house of founder John Warnock.

Apple Computers
It was the favorite fruit of founder Steve Jobs. He was three months late in filing a name for the business and he threatened to call his company Apple Computers if the other colleagues didn’t suggest a better name by 5 O’clock. They couldn’t, he did!

CISCO
It is not an acronym as popularly believed. It is short for San Francisco.

Corel
The name was derived from the founder’s name Dr. Michael Cowpland. It stands for COwpland REsearch Laboratory.

Google
The name started as a joke boasting about the amount of information the search-engine would be able to search. It was originally named ‘Googol’, a word for the number represented by 1 followed by 100 zeros. After founders – Stanford graduate students Sergey Brin and Larry Page presented their project to an angel investor, they received their first funding cheque made out to ‘Google’. Since they didn’t want to risk going back to the investor to correct the error, they retained the name ‘Google’!!

Hotmail
Founder Jack Smith got the idea of accessing e-mail via the web from a computer anywhere in the world. When Sabeer Bhatia came up with the business plan for the mail service, he tried all kinds of names ending in ‘mail’ and finally settled for hotmail as it included the letters “html” – the programming language used to write web pages. It was initially referred to as HoTMaiL with selective uppercasing.

Hewlett Packard
Bill Hewlett and Dave Packard tossed a coin to decide whether the company they founded would be called Hewlett-Packard or Packard-Hewlett.

Intel
Bob, Noyce and Gordon Moore wanted to name their new company ‘Moore Noyce’ but that was already trademarked by a hotel chain . So they had to settle for an acronym of INTegrated ELectronics.

Lotus (Notes)
Mitch Kapor got the name for his company from ‘The Lotus Position’ or ‘Padmasana’. Kapor used to be a teacher of Transcendental Meditation of Maharishi Mahesh Yogi.

Microsoft
Coined by Bill Gates to represent the company that was devoted to MICROcomputer SOFTware. Originally christened Micro-Soft, the ‘-‘ was removed later on.

Motorola
Founder Paul Galvin came up with this name when his company started manufacturing radios for cars. The popular radio company at the time was called Victrola.

ORACLE
Larry Ellison and Bob Oats were working on a consulting project for the CIA (Central Intelligence Agency). The code name for the project was called Oracle (the CIA saw this as the system to give answers to all questions or some such thing). The project was designed to help use the newly written SQL code by IBM. The project eventually was terminated but Larry and Bob decided to finish what they started and bring it to the world. They kept the name Oracle and created the RDBMS engine. Later, they decided on the same name for the company.

SUN
Founded by 4 Stanford University buddies, SUN is the acronym for Sanford University Network. Andreas Bechtolsheim built a microcomputer; Vinod Khosla recruited him and Scott McNealy to manufacture computers based on it, and Bill Joy to develop a UNIX-based OS for the computer.

Yahoo!
The word was invented by Jonathan Swift and used in his book ‘Gulliver’s Travels’. It represents a person who is repulsive in appearance and action and is barely human. Yahoo! founders Jerry Yang and David Filo selected the name because they considered themselves yahoos.

Just thought of sharing these facts..

via [expressions in solitude]

Its a very important to know the differences between PHP as an Apache Module and PHP as a CGI Binary.

Max Limpang had a post about Zyb, a free contacts management site.

It offers free synchronisation with your mobile phone over GRPS/EDGE

Really cool site.. A must try for any mobile phone user.

The venue of the BlogCamp has been shifted to TIDEL Park in Taramani, Chennai. The website of the camp at www.blogcamp.in has all the details about the camp.

The sudden rise in the use of AJAX and other similar RIA (Rich Internet Applications ) means that the legendary page views model which has been around since the beginning of the web is going to undergo a major change.

One industry which is certain to get hit by it in the Online Advertising Industry where pageviews are considered an important factor.

Forbes had an article some time back on Ajax breaking the advertising business model:

It also means that services like Google Analytics are a bound to get more users for their service .

I finally managed to get it working..

Gmail for my domain using Gmail Hosted offering from google.

All of Gmail’sÂ features under my domain email… 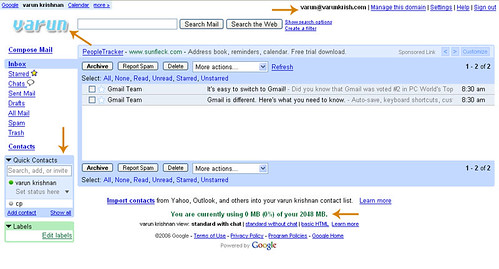 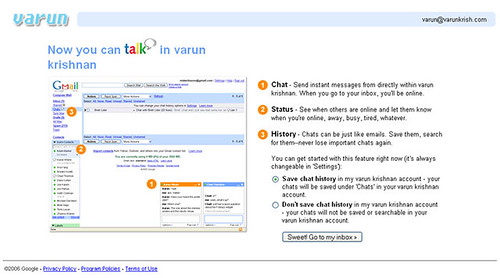